Ashland native Catherine O’Clair has lived in various towns and cities across Maine and New England, but what ties all of these places together are the paintings she used to capture the unique landscape that l ‘surrounded.

PRESQUE ISLE, Maine — Ashland native Catherine O’Clair has lived in various towns and cities across Maine and New England, but what ties all of these places together are the paintings she used to capture the unique landscape that l ‘surrounded.

“I’ve always painted the landscapes of where I was living at the time,” said O’Clair, who returned to her hometown six years ago.

O’Clair is the Featured Artist of the Month at the Wintergreen Arts Center in Près Isle. She kicked off her exhibit at the last downtown First Friday Art Walk on February 1.

O’Clair has drawn all her life, but it wasn’t until she lived in the greater Boston area and worked for a computer company that she began to take an interest in art. She took evening classes in graphic design, color and production techniques at the Massachusetts College of Art and Design, then taught herself to paint in watercolor and oil.

While living in the coastal village of Sorrento, Maine near Bar Harbor, O’Clair owned an art gallery in which she shared her paintings of Frenchmen Bay and the surrounding ocean landscape. She later lived in Belfast while employed at Bank of America and often portrayed the city’s downtown. In Wintergreen, O’Clair presents several watercolors of Belfast, including ‘Guardian Angels’, which depicts statues of angels in a local cemetery, and ‘The Gothic’, which captures a church on Main Street in Belfast. 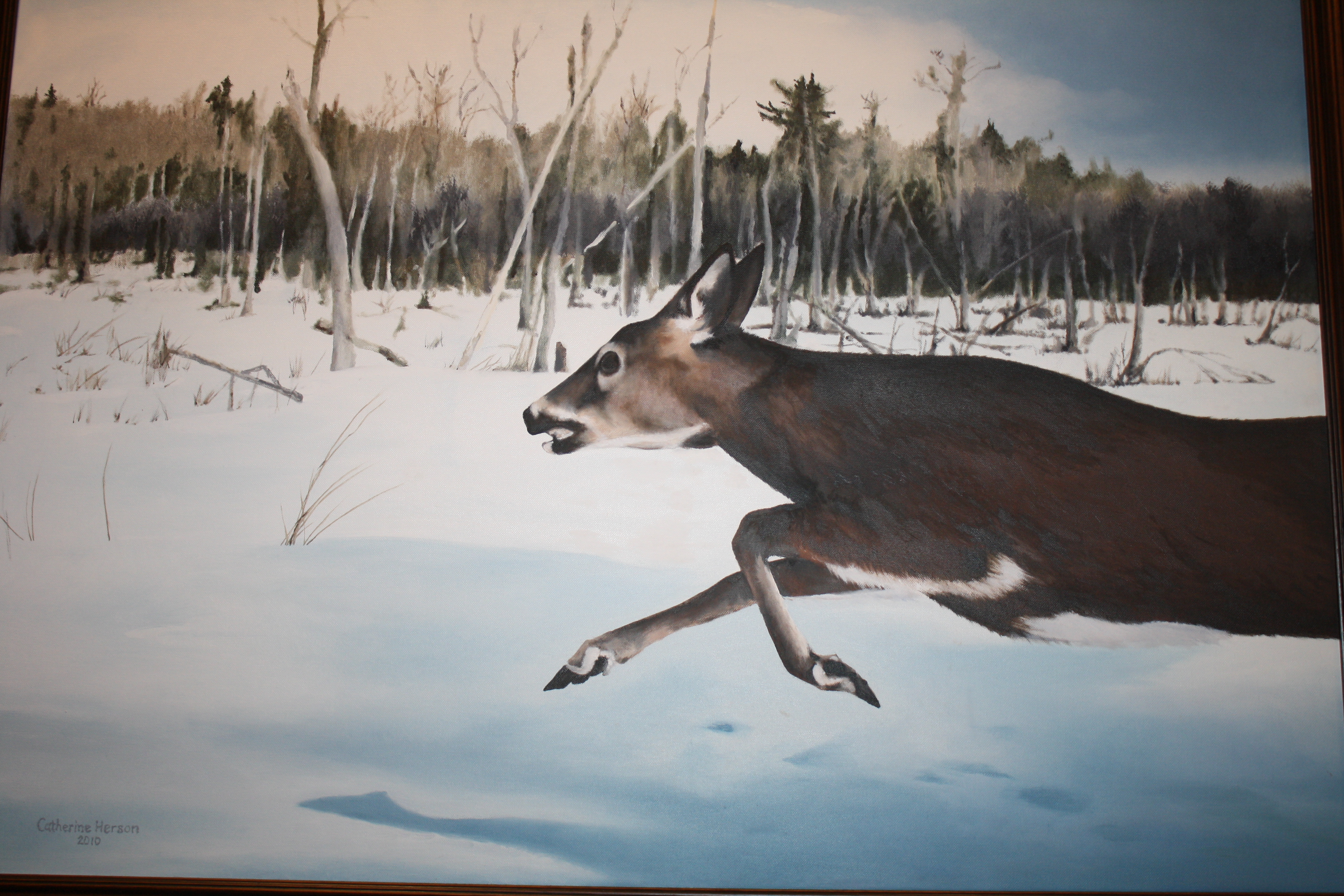 “Deer Running” is one of many paintings of Maine wildlife that Catherine O’Clair features in her February exhibition at the Wintergreen Arts Center in Près Isle. (Staff photo/Mélissa Lizotte)

Six years ago, O’Clair moved back to Ashland after marrying Fred Howes, who had been her high school sweetheart.

“When we met again, it turned out that we were both divorced. We started dating again,” O’Clair said.

Much of O’Clair’s Wintergreen exhibit features the landscape of Ashland and surrounding areas, such as the Tilley Farm at Garfield Plantation and a view of the Près Isle Road as it enters Ashland. It also depicts moose and deer in their natural wooded settings.

O’Clair noted that her return to Ashland after being away for years made her notice more of the intricate detail of the landscape, which influenced her way of painting.
“I appreciate the scenery a lot more now than before I think I took it for granted because it’s always been there,” O’Clair said. “It’s more beautiful now that I’m back.” 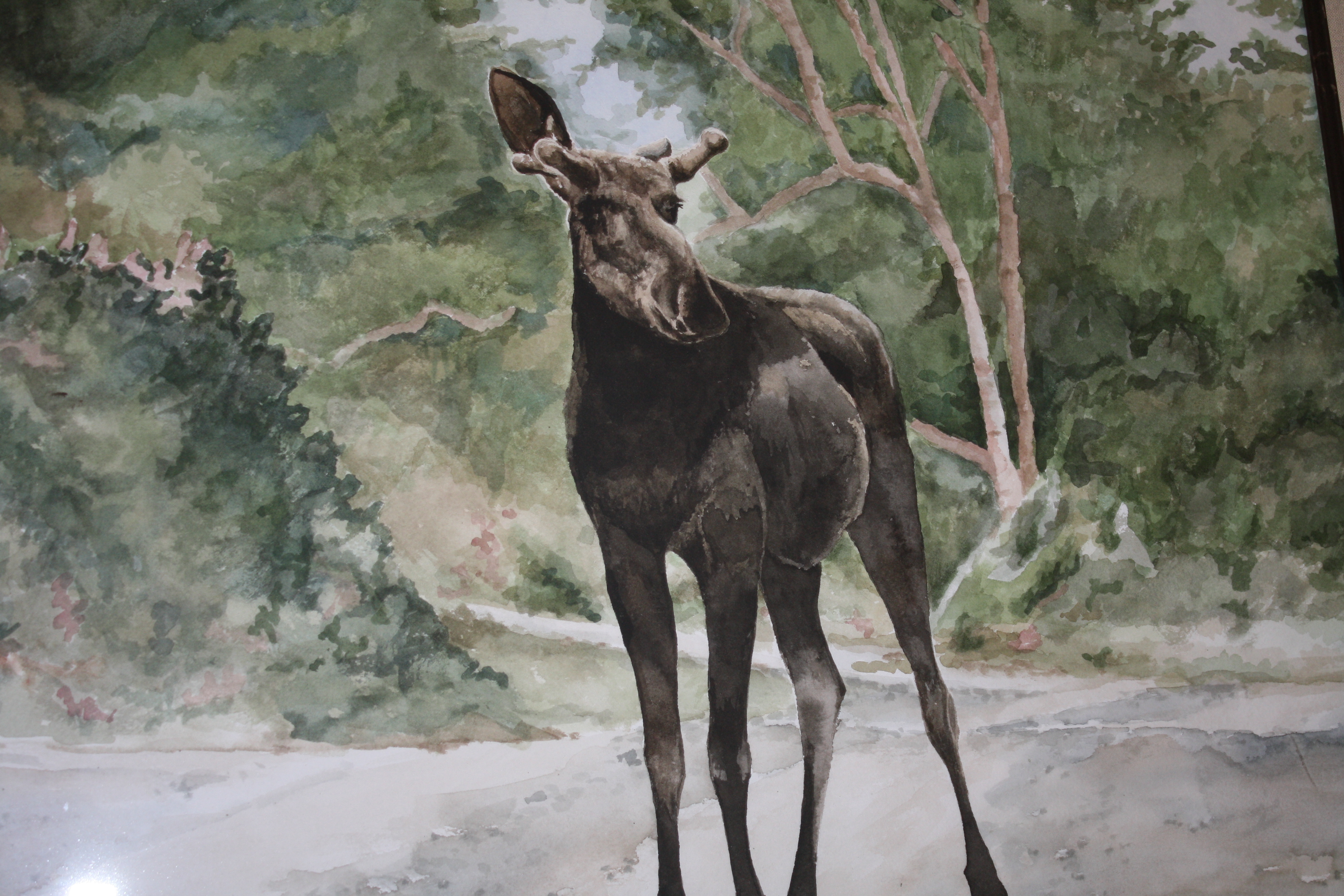 “Moose in Road” in one of many watercolors featuring the animal in Catherine O’Clair’s new exhibit at the Wintergreen Arts Center. (Staff photo/Mélissa Lizotte)

Heather Bessey of Ashland is a friend of O’Clair and said she enjoys how well her paintings portray both the landscape and atmosphere of the Ashland area. Some of his favorite paintings are those that show winter scenes.

“‘Tilley Farm’ is probably my favorite,” Bessey said. “Catherine’s colors are very vivid and the winter paintings make me feel how cold it is outside right now.”

Members of the community can view O’Clair’s exhibit throughout February at the Wintergreen Arts Center, located at 149 State St. in Près Isle. The next First Friday Downtown Art Walk will take place on March 1.