“There is so much to read in this picture. The spread of colors, the richness and also the symbolism, ”says City collector and headhunter Frank Hollmeyer of the first floral still life he bought by 17th century Flemish artist Jan Brueghel the Younger . This is a large painting of flowers around a central cartouche by Abraham van Diepenbeeck and he found it at one of Sotheby’s Old Masters sales as the financial crisis continued into 2009. “I had the felt like the world was falling apart… but I knew I wanted to spend money on paintings.

The floral still life of the golden age of Dutch painting had a cultural moment, inspiring a generation of floral designers (including Emily Thompson, Thierry Boutemy and Mark Colle), advertising campaigns (Gucci and Loewe) and photographers (Nick Knight frequently cites the Old Masters as a reference). All of this fuels a renewed interest in the carefully observed and meticulously painted production of the era, when hundreds of practitioners prolifically worked to meet an unprecedented demand for art. “You don’t have to wait long if you’re looking for a really beautiful still life,” says Clementine Sinclair, Old Masters Evening Sales Manager at Christie’s.

The genre exploded in the 17th century in the Netherlands, funded by a growing class of merchants eager to display their wealth. “Artists sold directly from their studios or through dealers,” Sinclair adds. “And there was a thriving market for paintings on a more domestic scale – cabinet pieces with a high level of detail.” Interest in flower paintings exploded as exotic species were introduced to the Netherlands: one of the oldest botanical gardens in the world was established in Leiden in 1590. At the beginning of the 17th century, Ambrosius Bosschaert and Jan Brueghel the Elder were the pioneers of a golden age with their ambitious scale virtuoso paintings of magnificent bouquets, often depicting a fantastic combination of specimens that would never bloom simultaneously in nature. This summer, Sotheby’s showed Brueghel’s first dated Flemish flower painting (with an estimate of £ 2.5-3.5million) – a c1605 oil in which almost the entire canvas was filled with hyacinths, daffodils , fritillaria, irises, tulips, peonies, lilies, roses and nigella.

Beyond the most notable practitioners, there are more affordable pieces, although even within an artist’s work there can be big price differences. A swag painting with roses, ivy and butterflies by Daniel Seghers sold at Christie’s this summer for £ 40,000. In 2019, two still life bouquets depicting roses, tulips, irises and aquilegia by the same artist both sold for over half a million, again doubling their expected costs.

These huge discrepancies provide tantalizing opportunities for collectors keen to hunt, like Hollmeyer, who has continued to collect works of the period for the past decade. “For £ 30,000 or £ 40,000 you can buy something from a phenomenal artist whose paintings are on display in most of the major art galleries in Europe,” he says. “What can you buy for that on the contemporary market? ”

Toby Campbell, director of Rafael Valls, agrees: “You can buy something with extraordinary skill and history behind it for sometimes a fraction of a contemporary piece.” He currently has a superb 1670 painting by Bartholomeus van Winghen of a vase of spring tulips, peonies, lilacs, sweet peas and jasmine (£ 95,000), as well as a photo by Abraham Brueghel from the same year with roses, primroses and jasmine in an urn (£ 48,000). Likewise, gallery owner Sander Bijl, of Bijl-Van Urk in the Netherlands, recently acquired a small floral painting depicting single stems of a wild rose, poppy, hyacinth and chrysanthemums from Jan van den Hecke, including Archduke Leopold Wilhelm, the Austrian governor of the Spanish Netherlands (after restoration it will sell for € 40,000).

Changes in interior design are also helping to popularize these old masters, as they seem to sit more comfortably in classic, casual bedrooms from designers such as Rose Uniacke. Note the old masters hanging in Nigel Slater’s elegantly understated Uniacke interior. “A growing number of my clients are asking for floral still lifes, but they tend to mix artwork with modern interiors or even contemporary artwork,” agrees dealer Nick Cox, who currently owns a blue porcelain bowl and white tulips, roses, daffodils and flowers. attributed to Pieter Casteels III (£ 15,525). A similar oil, dated 1715, was sold this summer by Hampel Fine Art Auctions for € 19,430. 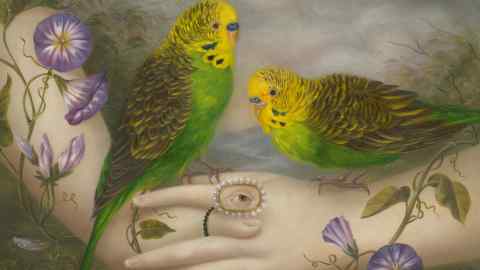 In addition, these still lifes are freed more and more from their bulky frames. “I have long thought that a lot of Old Master paintings are retained by their frames,” says Toby Campbell. “If you take the pictures out of the frames, they suddenly have new life. When you hang them in a contemporary space, they can look extraordinary.