The woods, streams, ponds and small waterfalls of the northeast generally do not inspire a sense of monumentality. Again Eric Aho manages to make them so in”Upstream“, an exhibition of new works at the BCA Center in Burlington by the established Saxtons River painter.

On mostly large canvases – measuring up to 78 by 70 inches – the oil landscapes range in a vertical sweep from glimpses of sky and clouds through towering pines to clusters of rocks. and felled trees. In each composition, a piece of water appears in the center: a waterfall, a forest pond, a gurgling winter stream.

The scale is reminiscent of the awe-inspiring depictions of nature at the Hudson River School – a comparison Aho himself made in interviews. But in his case, the grandeur comes from the profusion of bold brushstrokes and exuberant color. Through these two elements, Aho operates a sort of fusion of the figurative and the abstract. In doing so, he elects the process of painting with the process of looking at nature.

As Aho, a Massachusetts native with Finnish roots, explained in a phone call, he could never work solely in abstraction or representation.

“It’s not the way I or, really, anyone sees the world,” he said. “Looking is creating a record, but it’s also a confusion, a bewilderment. You can see the world in a fragmented way. The act of painting is similar to the act of looking.” 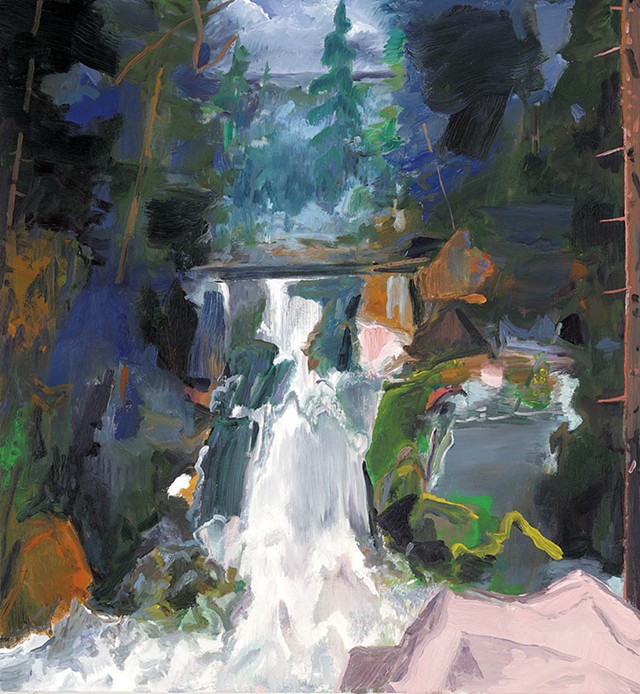 “July Pond,” at 60 by 52 inches, easily illustrates this point. The top of the canvas depicts a sunny day while an impenetrable pink haze in its center is perhaps a stand of shorter trees hit by the late afternoon light. Abstraction takes over in the pond at the bottom, perceptible only through submerged multicolored tree stumps and their oblique reflections. These come together to form flat and unexpected geometric shapes.

Aho usually skis or walks in the woods around his studio and begins an outdoor painting or returns indoors to recreate a scene from memory. During the pandemic, he cut the size and palette of his work; the current crop is a “return to scale,” as he put it, and a venture into new hues, including golden yellows and ochres.

The latter are the dominant tones of “Tamarack”, painted in the fall when the trees turn a brilliant yellow. Aho’s work is governed by the seasons: “I can’t imagine painting a winter scene in summer,” he says. The colors are so actively applied that they might as well represent a forest on fire, especially with the black tree stumps leaning in the foreground. (In fact, Aho did a series of JMW Turneresque wildfire paintings in the late ‘s.)

Balls of a purer yellow, perhaps straight out of the tube, dot the canvas, and in a thickly painted corner the artist has scribbled the work’s completion date with the pointed end of a a brush. The physicality of the painting is clearly of interest.

So are the limits of the canvases. In two paintings, ‘Falls and Pond in the Forest’ and ‘Small Winter Stream’, a bare pine trunk notched with broken branches is painted along the right vertical edge, as if to frame the scene.

“I would like the webs to last forever, but they have to have an edge,” Aho admitted. “The canvas seems a little bigger if I can make it look like I’m looking beyond [the tree].”

“Americana” is an understated, elegant composition with dark shapes and shadows framing a smooth body of falling water. The painting depicts an old mill pond, according to Aho. Its title refers to the collection of exposed natural elements – forest, water – as signifiers of culture, given that these elements were once shaped by human labor.

“Witness,” one of the larger canvases, frames a small waterfall and rapids between glimpses of a pink-hued sky and huge pink boulders. Two felled spruce trunks form a cross in the foreground. The subject of the painting is out of frame: the witness tree, an oak whose only presence is a twisted branch in the upper left corner.

Witness trees, often centuries old, bear the name of their sentinel presence through all kinds of natural and human events. The title of the painting has the effect of eliding the two witnesses — the tree and the spectator — who observe the scene through the eyes of its original witness, the painter. 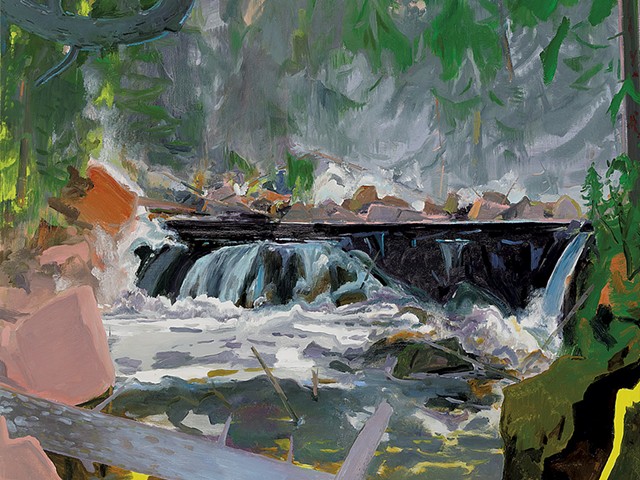 Aho earned his bachelor’s degree in printmaking and had studied painting for just one year of graduate school when he moved to Vermont to teach painting at the Putney School in 1989. By then, he recalls, “I was doing loose drawings with oil paint, not really painting. It remained an undefined experiment until later. I’m not even sure what it is yet.

Aho’s fearless and self-assured experiments in this medium have nevertheless earned him numerous awards, as well as holdings in major institutions, including the Museum of Fine Arts in Boston, the Metropolitan Museum of Art in New York and museums in Cuba. , Norway, Finland. , South Africa and elsewhere.

Aho caught the attention of this viewer in 2016, when he won the Vermont Governor’s Award for Excellence in the Arts and, in the same year, presented a solo exhibition at the Hood Art Museum at Dartmouth College featuring a series of paintings titled “Ice Cuts”. They represent a square hole that Aho had cut with a saw in a frozen pond to dive into, a Finnish post-sauna ritual. The paintings seem to channel Mark Rothko with their unfathomably black geometric squares. They are completely different from the work in the BCA show.

“[Painting] is ridiculously magical and surprising,” Aho commented. “Something remarkable happens when you put one color next to another.”