In the early 20th century, New Hope was the epicenter of Pennsylvania Impressionism, a rustic style of landscape painting that often depicted scenes from the Delaware River Valley. The winter compositions of this cutting-edge American art movement remain popular among collectors and critics.

On Sunday, Freeman’s will auction several paintings by two of the style’s most influential artists, Fern Coppedge and Edward Redfield. The Philadelphia auction house expects the largest compositions to sell for up to $300,000.

Other paintings from the movement can be seen at the Michener Art Museum in Doylestown, which has one of the nation’s largest collections of Pennsylvania Impressionist works. The movement has been defined less by a particular aesthetic and more by the community surrounding the “artist colony” in New Hope, said Laura Turner Igoe, chief curator at Michener.

But these artists were all Impressionists, which Igoe defined as having a “loose, brushed style” focused on landscapes. The highly expressive approach, which emphasized the precise depiction of light, was pioneered by French painters like Claude Monet in the late 19th century before becoming a global phenomenon.

The artists’ colony began when painter William Langson Lathrop moved to New Hope in 1898, Igoe said. He mentored many young artists who followed him to Bucks County around the turn of the century. Land was cheap, and the old mills along the Delaware River, which had reached the end of their productive life, could easily be repurposed as studios.

Redfield was the second Pennsylvania Impressionist to settle in the area.

Unlike Lathrop, Redfield was a loner, Igoe said. He settled in the isolated center of Center Bridge, three miles north of New Hope, and didn’t spend much time mentoring young artists. Three of his paintings will be for sale in Freemans auction.

“Road to the River” depicts a springtime scene of a woman walking down a dirt road toward what is likely the Delaware River in the 1910s. But the most important aspect of the painting is the trees that surround it. .

Some have poppy pink and white flowers, which bring energy to the earthy palette of the composition. Others lean over the path and cast sharp shadows on the landscape to give some contrast to the sunny scene.

This auction will also include Redfield’s 1936 work “Winter Harmony,” a similarly sized canvas with a much closer view of the river. It is expected to fetch between $150,000 and $200,000.

A third, much smaller painting titled “Crashing Waves” depicts a seascape on the coast of Maine, where Redfield spent many summers. It should sell for between $20,000 and $30,000.

Coppedge, the other prominent Pennsylvania Impressionist featured in the auction, was a member of the Philadelphia Ten, a group of local creative women who paved the professional path for women to pursue the arts during the interwar period. , Igoe said. Before that, women in the field were often seen as amateurs.

Coppedge didn’t move to New Hope until the 1920s, Igoe said. She was one of Pennsylvania’s most “abstract” impressionist painters due to the influences she gained while traveling in Italy.

Three of his compositions, including two winter landscapes painted in the 1930s, will be auctioned on Sunday.

“Winter Decoration” is a depiction of Lambertville, New Jersey as seen from New Hope. The red and brown tones brought to the composition by the buildings give the room a sense of warmth and depth. 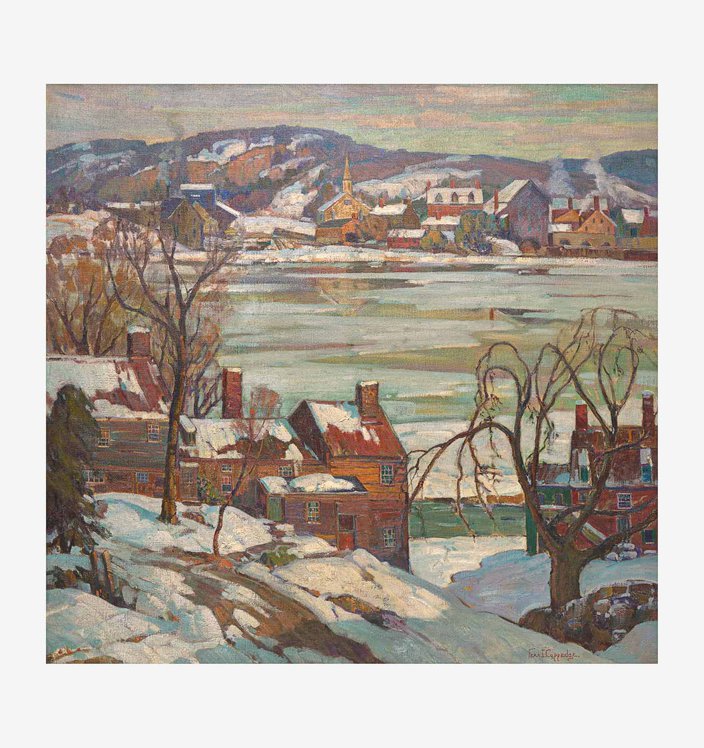 The same goes for Coppedge’s decision to paint the landscape in the middle of an early winter sunset, so that the brighter hues of pink and orange – which would normally be absent from a winter landscape – are visible.

There is a precision to Coppedge’s work that can be seen in the shadows in the foreground of the painting, the reflections of buildings on the river, and the geographic and architectural precision of the cityscapes of Lambertville and New Hope.

Two other Coppedge paintings will also be sold. One is a Bucks County winter landscape depicting Carversville Creek. The other depicts a fish market in Gloucester, Massachusetts, painted in 1916.

Works by three other Pennsylvania Impressionist painters – George William Sotter, Kenneth Nunamaker and John Folinsbee – will also be up for sale at Sunday’s auction. Igoe described the artists as peripheral members of his second generation movement.

Sotter, one of the few artists mentored by Redfield, began his career making stained glass, which is featured in many churches in Pennsylvania, Igoe said.

Two of his paintings are included in the auction, but both depict scenes in coastal towns rather than the Delaware Valley. “Fishing Village at Moonlight” is expected to cost between $25,000 and $40,000.

The approaches to Pennsylvania Impressionism taken by Nunamaker and Folinsbee focused more on dark tones and contrast, which made their pieces more dynamic and dimensional.

The two Nunamaker pieces being auctioned depict a winter landscape in the Delaware Valley and a scene from Carversville, where Coppedge often worked. They should both fetch around $40,000.

Six Folinsbee pieces will be sold. The largest, which depicts a farm on a steep cliff overlooking the Delaware River and an irrigation ditch, is expected to cost between $30,000 and $50,000.

Sunday’s virtual auction will begin at 2 p.m. Bids can be placed by those who have pre-registered on the Freeman website.