Art lovers visiting the historical house museum Palazzo Falson in Mdina for the first time will surely be pleasantly surprised to find an art studio within the premises of the palace.

One of the paintings during the restoration project. Photo: Prevarti

On the studio walls hang oil paintings by former palace resident Olof Frederick Gollcher, six of which have recently been restored.

Gollcher (1889-1962) is recognized more as an avid collector, researcher and philanthropist who lived at the palace (formerly known as Noman House) rather than an artist but, according to the palace curator, he was an artist at full share. .

“It is probably the result of a slowdown in his activity as a painter when he moved to Malta after buying the Palazzo Falson with his mother in 1927”, explains Caroline Tonna.

“The palace became his life project and his ambition was to make it a dream house, to embellish it with architectural elements inspired by the Renaissance and to create a perfect setting for his collections. His wish was also to open the house to the public as a museum after his death.

Documents show that Gollcher studied art in Rome for two years under the tutelage of Polish painter Edouard Okun (1872-1945). The student-teacher relationship between the two grew into a close friendship and the two exhibited their works at the 89th Esposizione di Belle Arti della Società Amatori e Cultori held in Rome in 1920. 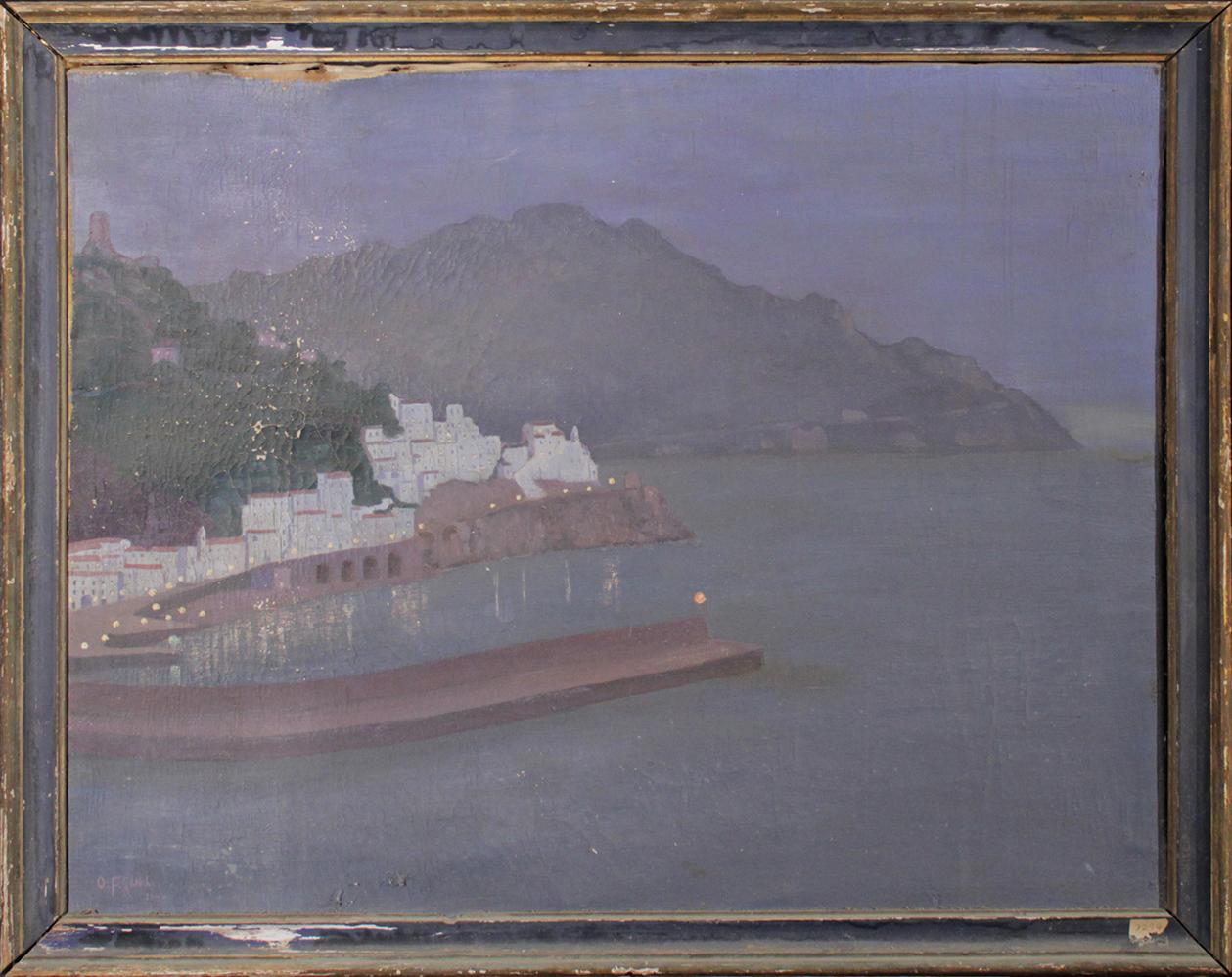 ‘Port’, oil on canvas, by Olof Gollcher, before (above) and after restoration. Photos: Palazzo Falcon Historic House Museum 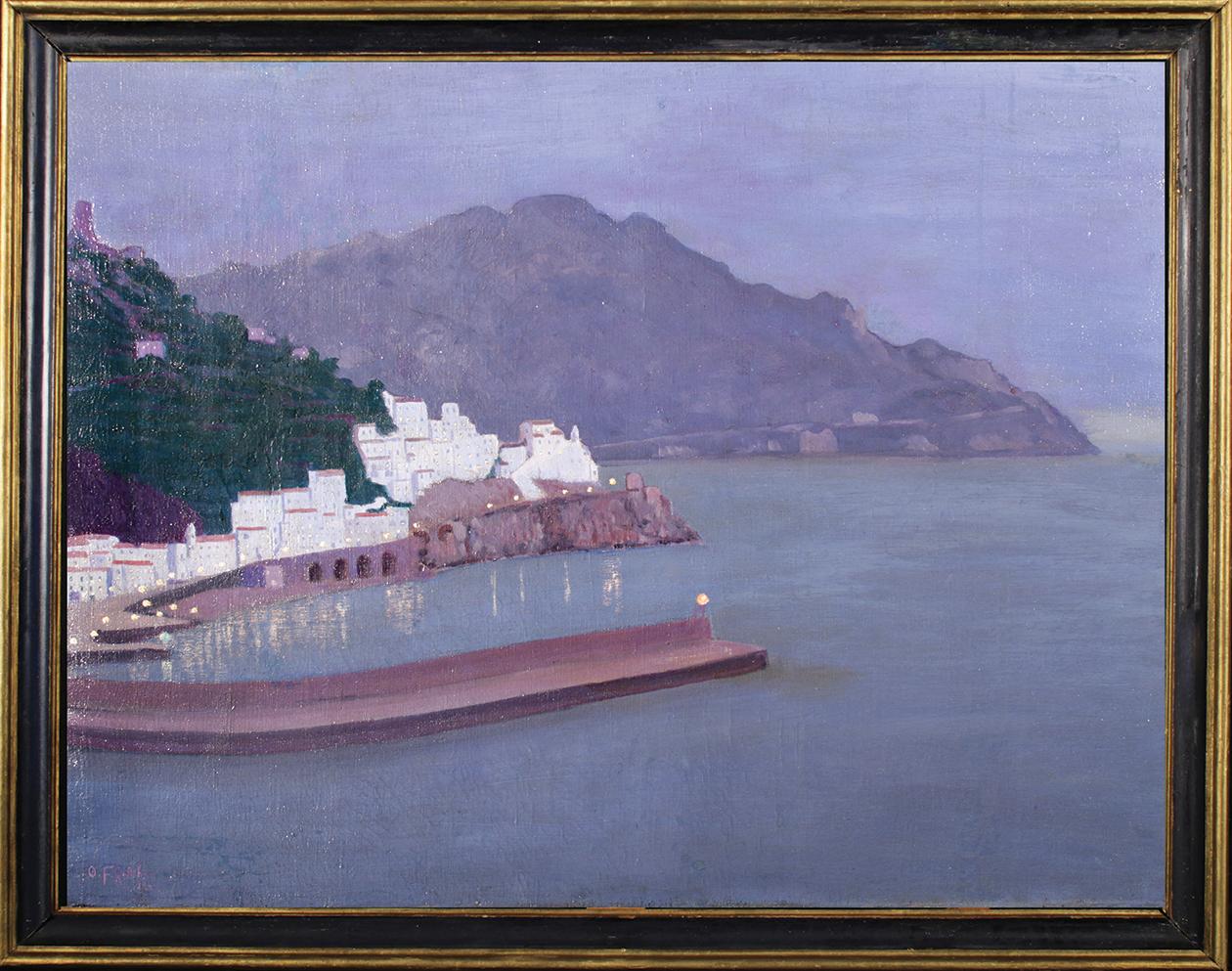 Tonna adds that, in the following decade, Gollcher moved in established artist circles, mostly Italian, and he was also part of a brotherhood of artists who shared a love for the pipe and called themselves the Confraternita ‘della Pipa.

Clippings from Italian newspapers, kept in the palace archives, show that the group used to organize fun events with playful rituals, costume parties and occasional art exhibitions. Around 1924, Gollcher was Gran Compare of the male-only group of artists.

The bond between the artists remained strong even after the demise of the artists’ club. Gollcher had a number of fine works by his artist friends in his collection which he generously donated to the then National Museum of Malta, now in the MUŻA collection.

Tonna says Gollcher was classified as “maestro del bianco e nero” (master of black and white) for his masterful technique of etchings and lithographs which he exhibited mainly in Italy, at least since 1918. He also executed oil paintings, using tints of blues and colors vivid contrasts on a coarse canvas stretched over a simple wooden frame.She adds that line dominates in her paintings, perhaps due to her aptitude for etchings and lithographs.

He usually signed “OF Gollcher” in the lower left corner of the canvas and included the date of the painting. 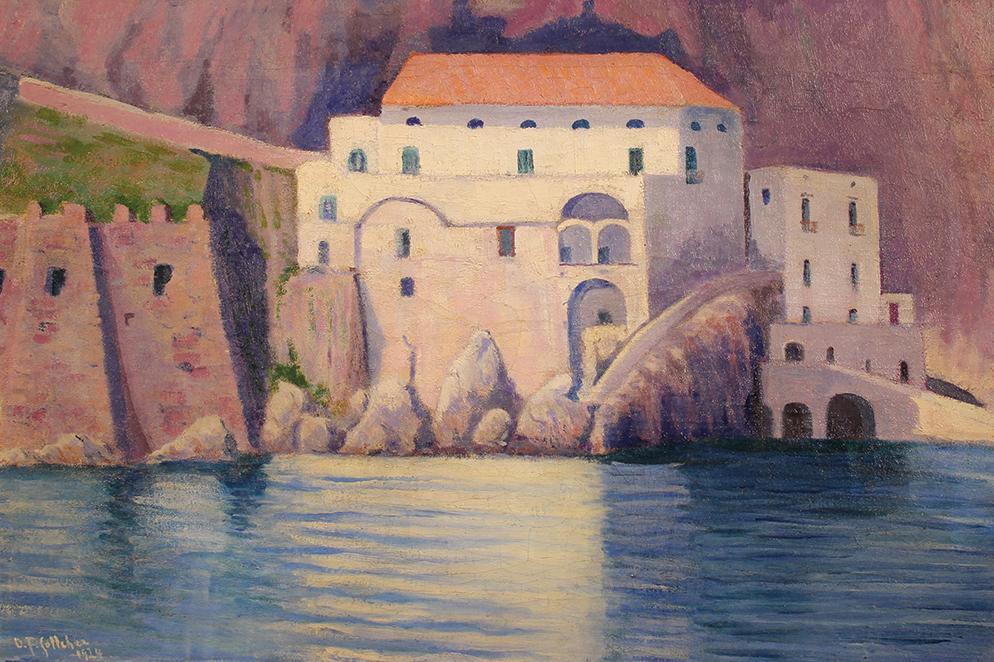 ‘Sea and landscape’, oil on canvas

The 14 Gollcher oil paintings found at the palace are considered a very important part of the museum’s collection.

“They are of great value to us as they shed light on Olof’s life as an artist, paintings he executed during his early years of youth. Some of these paintings have been exhibited in Italy, in London, Paris and Malta,” notes the curator.

Gollcher was apparently inspired by the Italian landscape, such as the southwestern region of Campania, the scenic coastline of the Amalfi Coast, the dramatic cliffs of Ravallo and Positano, quaint towns like Cetara and Atrani, and small villages like Maiori and Erchie in the province of Salerno.

His seascapes and landscapes are bathed in Mediterranean light

“His paintings are very serene and give the impression of stillness. His seascapes and landscapes are bathed in Mediterranean light and he almost never includes figures in his paintings. He only uses contrasting colors for a few selected elements such than the doors and the roofs that contrast with the transparent blue sky and the sea”, underlines Tonna.

Gollcher set up an art studio on the roof of the palace where he had natural light and space for his easel painting. When Fondazzjoni Patrimonju Malti restored the palace between 2001 and 2007, this workshop was transformed into the museum café and another room on the ground floor was dedicated to Olof’s workshop, where his works and objects preserved from his former workshop are exhibited for the enjoyment of visitors.

Adverse weather conditions, such as high humidity and high temperatures, as well as mold infiltration, unfortunately damaged a number of paintings. 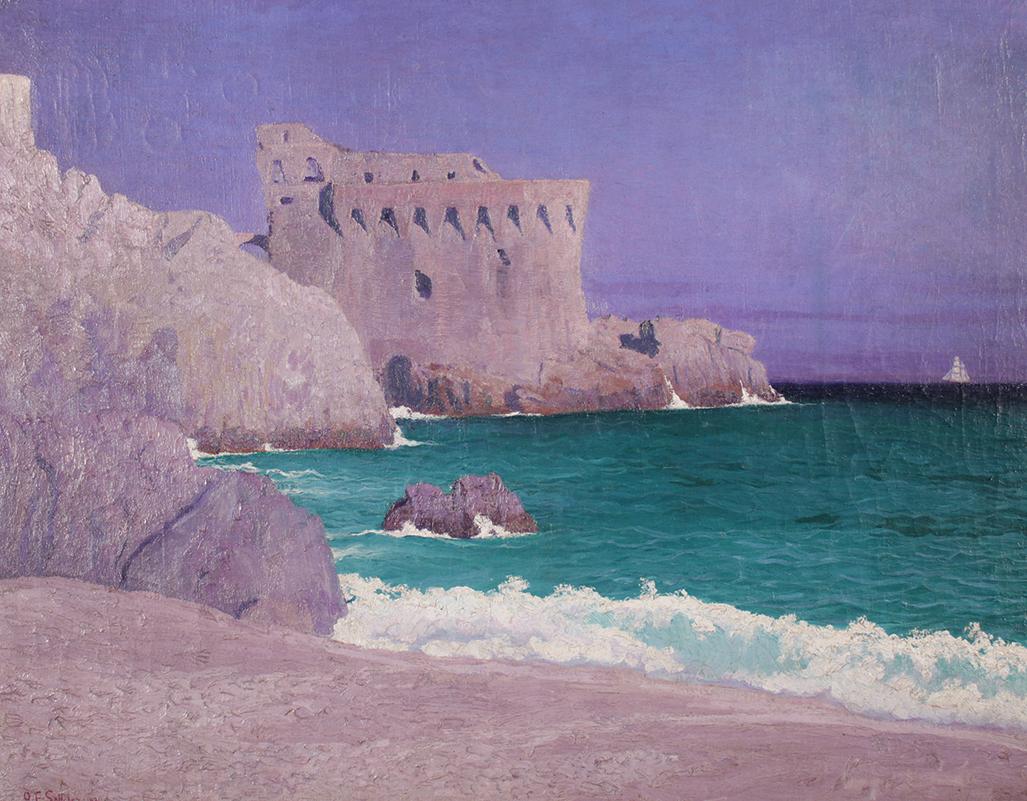 PrevArti has thus recently been entrusted with the restoration and conservation project of six works, thanks to funds obtained from the Majjistral Action Group Foundation within the framework of the LEADER program of the European Union’s rural development program for Malta 2014-2020 . The project was also co-financed by the OF Gollcher OBE Art and Archeology Foundation.

Pierre Bugeja, senior curator at PrevArti, says that perhaps in the past, before the Palazzo Falson was turned into a museum, these paintings might have been stored in a humid environment for some time, without proper ventilation. Additionally, the type of canvas used for these paintings is extremely sensitive to changes in the environment as it expands in high humidity and contracts when exposed to high temperatures. 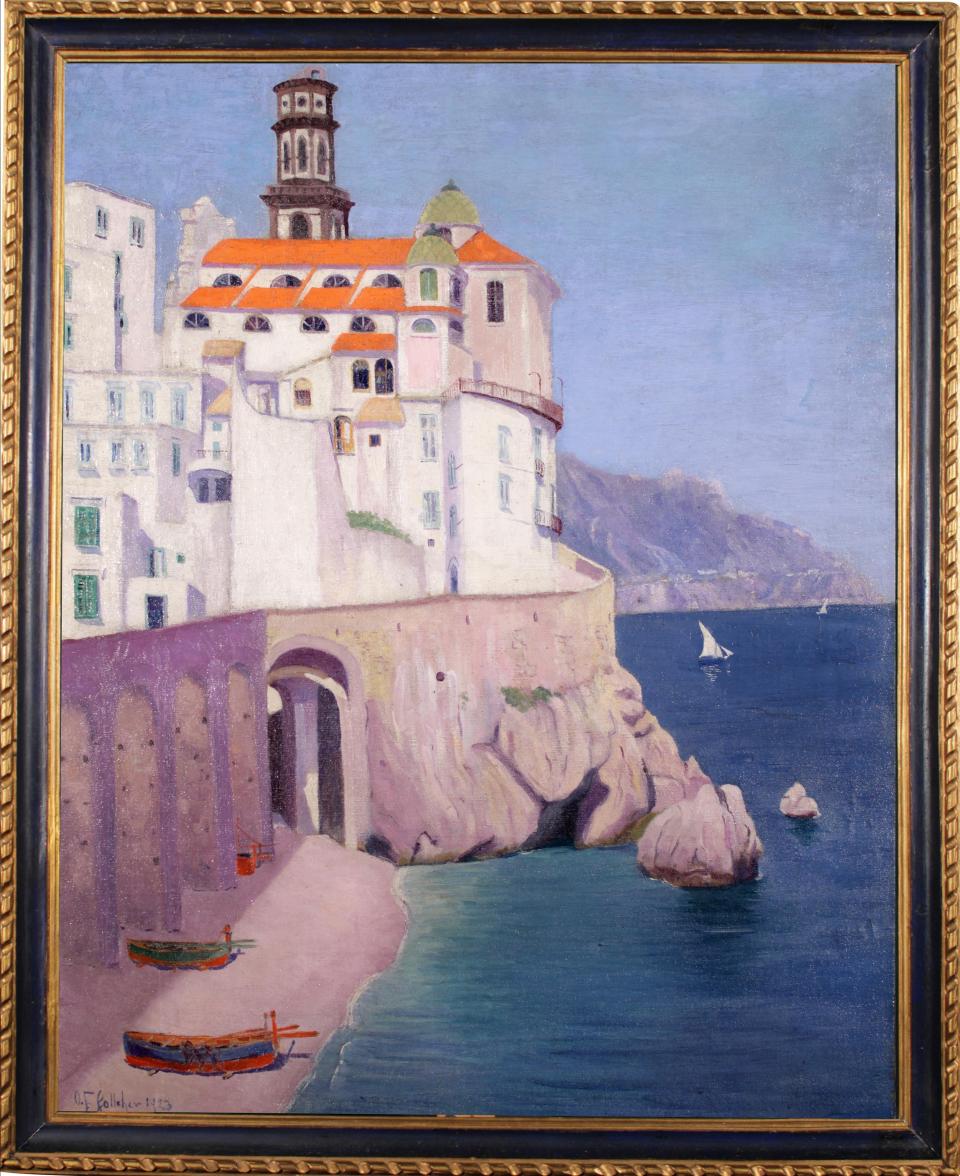 “These constant movements caused the canvas to expand, lose its tension and deform. In one painting in particular, the canvas had even come off the stretcher. Due to these movements of the canvas, the oil paint film had cracked rapidly, forming stretcher marks and suction cups, causing the paint to peel off in some places,” notes Bugeja.

He adds that since the paintings have never been varnished, dust and dirt accumulated from aging have become embedded in the surface of the paintings, making them duller than they originally were. The decorative frames were also in a poor state of preservation.

“The biggest challenge, however, was the elimination of paint layer suction and canvas warping,” explains the restorer.

The restoration process involved stabilizing the canvas supports from behind followed by intervention on the pictorial image; subject the paints to controlled humidity and heat to eliminate any deformations present; edge reinforcement as they were frayed and deteriorated from rusty nails and paintwork cleaning to remove accumulated dirt. It was also necessary to fill in and retouch the lacks of the works, to varnish the paintings and to restore the decorative frames.

In total, the duration of the conservation and restoration work on the six paintings lasted four months. 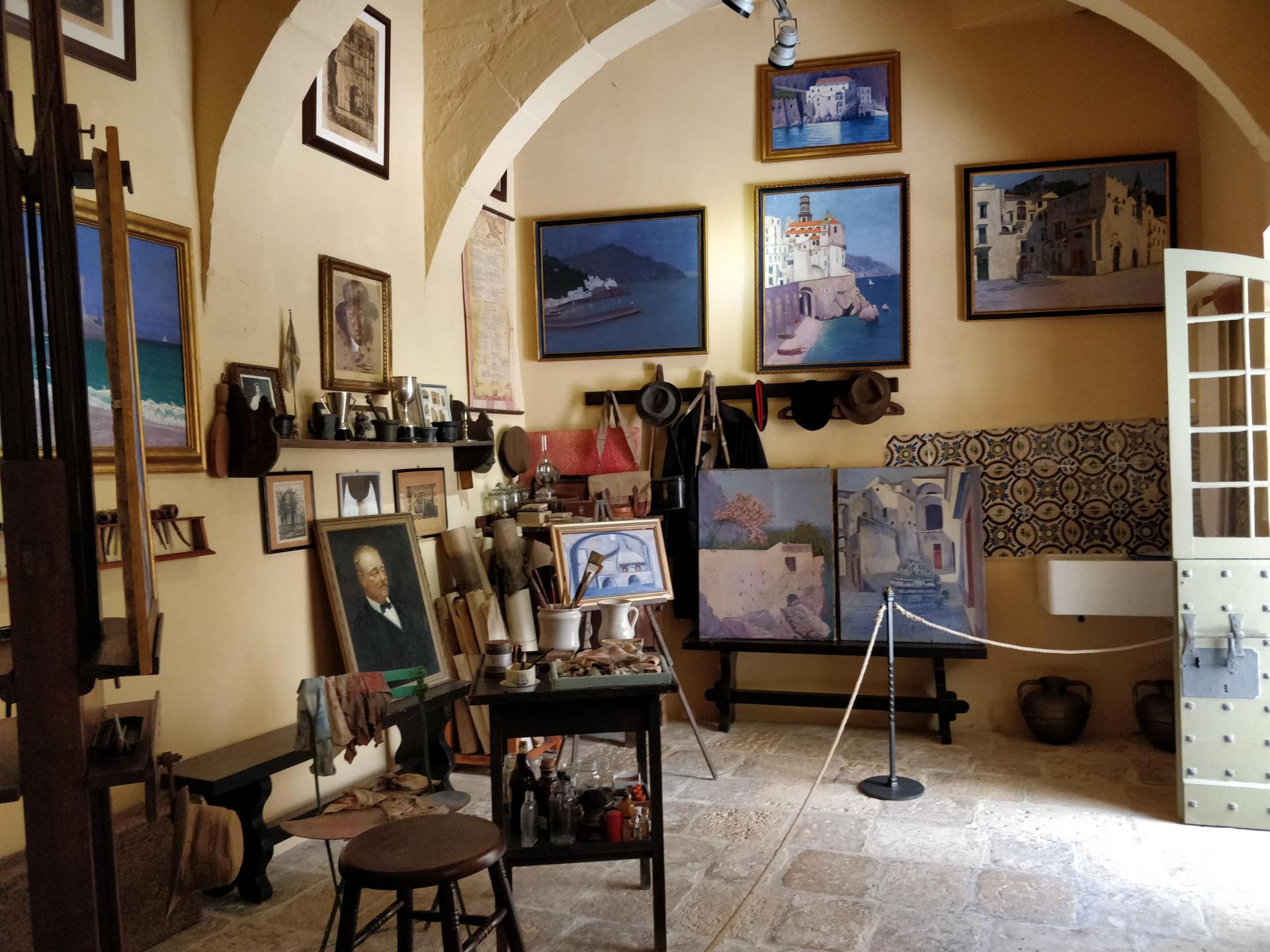 Some of the paintings hung in the studio of the Palazzo Falcon.

Visitors now have a clearer view of the paintings and can perhaps easily guess Gollcher’s source of inspiration for each painting.

“We can identify some of these places through photos taken by Olof from our photographic archives and documents also reveal that he was in the Campania region. Olof also titled some of the paintings based on the location being painted. There is also a painting of Xlendi, Gozo, a view of the beach and two boats in Malta’s Grand Harbor,” says Tonna.

The palace, in collaboration with the Association of Art History Students, will host an online conference on Thursday, May 27 on Gollcher’s art and the recently restored paintings at 5 p.m. Tonna and Bugeja, as well as art historian Charlene Vella, will share their views on the subject. The conference is free but reservation is essential on [email protected] A link will be sent to follow the conference.

Caroline Tonna is grateful for the help received from former curator Francesca Balzan, who has researched and published Gollcher’s art extensively, and from research volunteers at Palazzo Falson, who over the past 14 years have cataloged and researched the archives.

Independent journalism costs money. Support Times of Malta for the price of a coffee.